On the cusp of the Unknown Mass lies a city, oft spoken of but seldom seen. Dryne they call it, City of Words. Those who have travelled beyond the edge of the Protectorate speak of it in hushed tones, as if a violent word would dispel the very memories of their visit. They talk of a journey along the coast, past the final Watchtowers and the Mad Pathways. Weeks it takes, longer than the Holmgang crossing, longer even than the fanciful tales of the fabled trek of the Low Folk across the Abyssian Tableau.

Forlǫg dreadnoughts crowd the channel leading to docks dyed black by endless tides of murk. The sky is lower there, so they say, a grey expanse without end. No sunlight has ever touched the cobbles of Dryne and the darkness hides deeds most infernal…

Humans: The origins of Dryne are lost to those beyond the lofty walls of Scholars Row, but common rumour has it the city began as a trading post straddling the opposing Human and Low Folk empires. Although the more mysterious truth remains elusive, it is a fact that humans are the city’s most populace race. Only the fool would deny that this fragile people command sway over the city, officially or not. The Dapifer commands the civil mechanisms of government from the vast Administorium in The Hub, the High Sheriff commands his officers from the Mandatum in Gloam and the scholars create technological innovations at the University. (English/latin)

The Forfeit: Inhuman monsters said to come from the Dreamplace, abandoned by their peers and left to die in the Waking World. Highly intelligent and superhumanly strong most eke out a living as manual labour or muscle for the gangs and pubs of the city. Reviled or ignored by the humans of Dryne, they have fashioned an alliance of convenience with the Urgs.

Pyres: Humans born with haemoeagolia, the insatiable need for blood. Unable to create haemoglobin, they must ingest it at regular intervals. University Scholars have created an artificial source but the cost is high and the relief low. Many pyres take quickly to the bloodbrothels of Surelove, or even less scrupulous methods to survive. It is rumoured the Dapifer himself is afflicted. (Zulu)

Low Folk (rare): Dwarf proxy. Engineers and technicians responsible for the majority of tek in the city. Almost extinct due to an unknown catastrophe, their history and truenames are lost. Rumoured to be demon worshippers of the Dreamplace, their arcane rituals were said to have summoned the Forfeit, destroyed their civilisation and granted them a glimpse of the First’s omniscience. Live underground in the Shambles, the network of sewer-like tunnels that span the city. The only regularly seen example is the Smeltermax, part of the Dapifer’s Inner Council. (Urdu)

Aderyn: Birdmen of the north. Also, a Forlog delicacy. (Welsh)

Forlǫg: Perhaps human once, the massive Forlog are walking, rolling stacks of meat. Often borne on the back of Urg slaves or Forfeit hirelings, the Forlog are masters of trade and deception. Their dreadnaught slaver fleets are a regular feature of Deeptown. Mass is a sign of affluence in their culture; mothers take supplements to ensure their children are born obese and men regularly drink from Urgbone grease flasks (the aesthetic difference between the sexes being minimal). The Forlog ambassador is considered a friend of the Dapifer and dines regularly with Dryne’s leader. (Old Norse)

The Elektric Junkers: A small gang of Low Folk united by their belief that elektricity, not gas or steam, is the future. Part cartel, part thinktank, the former very much to fund the latter, they create, trade and steal designs, ideas and products; anything to do with advanced elektriks. They have a clandestine agreement with the University Scholars, gaining access to their labs for a share of profits made by their racketeering. Unknown to most, the Dapifer’s personal quarters are fully elektrik, as is the University.

Shipping Guild: A guild in the loosest sense, the Forlog run their slave and trade cartel from the warehouses of Deeptown. Recognising Dryne’s tenuous position on the edge of Low Folk territory, the Forlog immediately assigned one of their elite trademasters to the city. Ambassador Gormr speaks for the Forlog nation with absolute authority and has created one of the more profitable trade routes for his people with that most uncommon of goods: knowledge. Dryne’s Scholars are without equal and Gormr ensure the Forlog are the first to benefit from any new discoveries. The city’s teeming Urg and Forfiet population also feed the thriving slave trade.

Religion is viewed through two lenses in Dryne: Fear or Devotion. Those who do not Believe often walk in the shadow of those who do, sometimes literally. The temples of Beggars Lane tower above all but the Administorium, their twisted towers glimmering with exotic minerals and stones. To be an unbeliever is to be outcast. Even the most cynical dockworker may be found with a ceremonial latticework shell, or chit of obsequies. The names of the Gods outnumber their believers, but a few have risen above the din to claim their space amongst the high strata of Great Ones.

Derided on Scholar’s Row, whispered in the Shambles, banned on Beggar’s Lane, no other religious ideology conjures fear and curiosity like the Dreamplace. Less a religion than a belief, those who speak the old tongue of the Low Folk talk of waking visions of vast unknowable plains, impossible oceans and The Sky That Was. There are no monuments to the Dreamplace, nor prophets or texts, only a simmering undercurrent that has survived purges, massacres and the rise of tek. Rumours abound of a high priest of sorts, a carrier of the ancient ways known as the Slumberer. She walks this world and the Dream  together and is both conduit and keeper. Those who claim to have met this being speak of a woman dressed in fog and shrouded in permanent night. Stories abound of her wisdom and age and of a peacefulness that belies her sinister nature. Only one documented encounter exists in the annals of Dryne, held deep in the belly of the University library and protected by more teklocks than the even Dapifer’s private quarters. 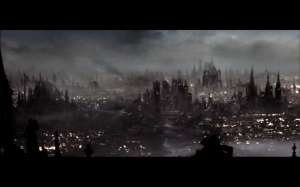 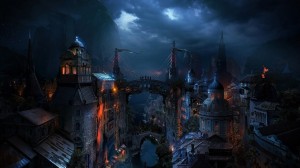 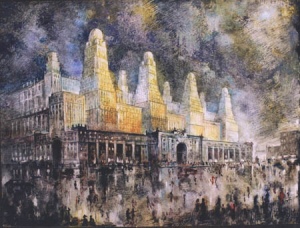 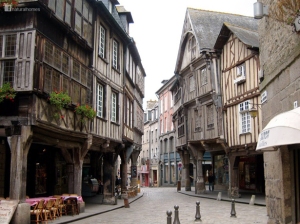 From the docks the imposing sight of The Hub commandeers the skyline. The city’s administrative heart is an immense jumble of towers and buttresses laid at angles distressing to the eye. From this monstrous fortress of bureaucracy the Dapifer wields power absolute. He is the city, and the city is him. Few know of the man’s origins though rumours abound. Some say he was a slave who killed his master and rose to power through murder and fear. Others claim he was raised in Aderyn and that the birdmen sponsored his rise as a soft occupation. Those with an ear to the ground and a watchful eye say nothing. To a man who can erase his history in the City of Words, erasing a man would be little challenge at all.

A legion of enforcers led by the Sheriffs and Bailiffs rule the city with a fist if not of iron then of stone.